It is with a full and grateful smile that Renato Sio answers our question: What has kept your company alive for 20 years?

“God’s grace! Our story has always been associated with God’s grace and mercy. It has been our constant theme,” says the 65-year-old chair of Sanitary Care Products Asia (SCPA) Inc., a hygiene solutions company that produces such products as toilet paper, kitchen towels and table napkins.

The proof, adds Sio, is the fact that they survived three major disasters: the Asian financial crisis in 1998, the burning down of their main factory in 2012, and the flooding of another facility in 2014.

“If not for God’s grace, we might have folded up. But we’re still here and still serving,” he says.

One of the reasons Sio decided to focus on producing hygienic paper products was his wife’s sensitive skin.

“Toilet paper, when you place it on a moist forehead, will leave lint residue, coming from the short fibers of recycled paper. So we decided that there is a niche we could attack—for sensitive-skinned people,” he says.

Sio says he also chose paper products as his business because it was his expertise, after spending the first 25 years of his career as a corporate employee in the paper-making industry. What pushed him to finally set up his own company was a lesson he learned after taking up a short advanced management course in Hawaii.

“The conclusion [I] got from that course was that the paper-production industry had no more competitive advantage. The Philippines couldn’t be a good paper maker. The solution was to go directly to the consumer—don’t just make the paper. So I selected tissue,” he recalls.

Using his retirement pay, Sio says he put up SCPA with three business partners, who, sadly, bailed on him once the Asian financial crisis hit the company. “They said, give us back our money. That’s another lesson which our pastor taught me: Wealth transfers during the bad times, not the good. That’s what happened: I had to borrow money to pay off my business partners,” he says.

The doubling of their production cost due to the sudden depreciation of the peso from P20 to the US dollar to P38 was another huge problem, says Sio. The company was “literally bankrupt,” but, again, thanks to God’s grace, they had loyal clients who paid them promptly and, most importantly, in cash. 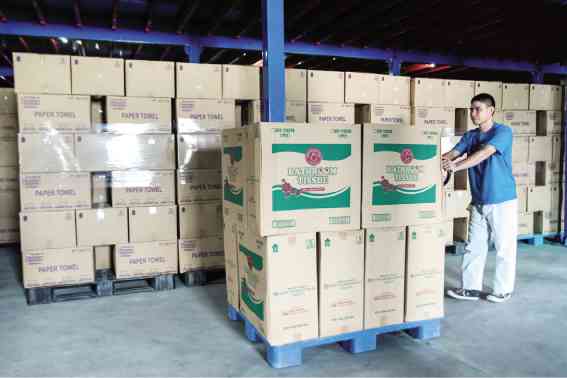 SCPA has seven plants and around 2,000 employees

Now, says Sio, he is reaping the rewards of sticking it out despite that tumultuous period, unlike his former business partners.

“The growth of the company remained with me,” he adds. Just last year, SCPA had over P2 billion in sales.

Their brands, which include Sanicare, Tisyu, Femme, Cheers, Jade and Naturale, are sold in all major supermarkets nationwide.

The company has seven plants and around 2,000 employees.

The 2012 fire that destroyed their Taguig factory is also seen by Sio as a blessing.

“When I look back, the fire—which was like having a death in the family—was God’s way of telling us, hey, you modernize. If not for that, maybe we would still be using some of our old machines. But now, all of our machines are new,” he says.

With his company’s success, Sio also makes it a point to take care of the people he serves: his customers and his employees. In the past six years, SCPA has not raised product prices, because “[production] efficiency has remained on-scale,” says Sio.

“And despite the rising cost [of production], every year we increase the pay of our people,” he adds. It all harks back to what he hoped to achieve 20 years ago when he first opened shop: To create a company that will be fair to its people.

“I spent 25 years in the corporate world; most corporations will really take advantage of their employees,” say Sio, “We wanted to create employment for Filipinos who want to stay in the Philippines and still get compensated and treated properly. I think the fact that we’ve reached 20 years affirms our success in reaching that goal.”

How to plan a family picnic